I actually used the same Red Waldorf (Velvet) Cake recipe I posted a while back but I kinda adjusted some of the ingredients because I find measuring with ‘cup’ is not as accurate as going by weight and I got to weighing by estimation and am pleasantly pleased with the success this cake turned out …light, moist & melt in the mouth with each bite … so, I reckoned I better blog it before I forgot the adjustments I made to the recipe 😉 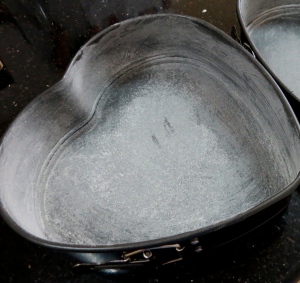 This time because I baked it for Valentine’s Day, I used a heart-shaped cake tin … greased & dusted with some flour

This is how the mixture of the cocoa powder mixed with the red colouring looks … lovely red mixture!

In a large mixing bowl, cream/beat 113g (1/2 cup) shortening (I use butter) at medium speed for about 30 seconds 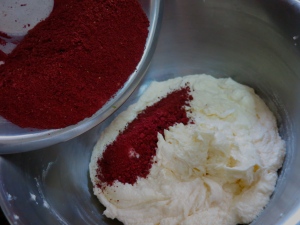 Beat in the cocoa mixture …

This is how it looks after the cocoa mixture is mixed with the creamed sugar, eggs & shortening … a beautiful red batter 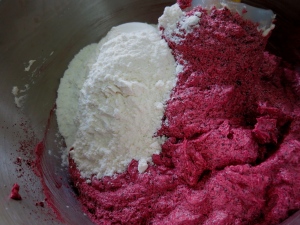 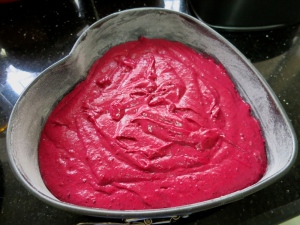 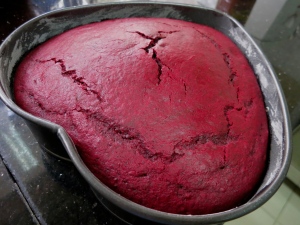 See how temperamental my oven is? I set it at 175°C and top of my cake actually cracked half-way through baking!  Anyway, when cake is done, remove from oven and set it atop a wire rack to cool in tin for 10 minutes then remove from pan and allow to cool totally on wire rack before you ice it 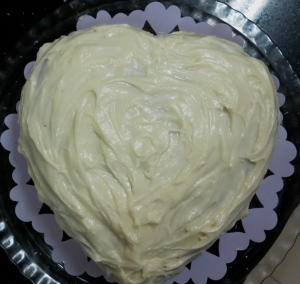 Ta-da! The iced cake just in time for our Valentine’s Day after dinner dessert 😉 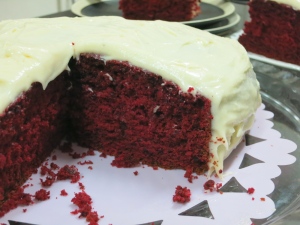 I can never get enough of admiring the rich, romantic red colour of the cake and it looks even more awesome when iced with the white creamy frosting!

Mix the cocoa powder and red colouring together and set aside 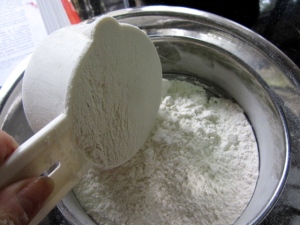 Sieve the all purpose flour

Beat shortening together with sugar & vanilla until well mixed then add eggs, 1 at a time … beating until combined

… and buttermilk …. beating after each addition until combined 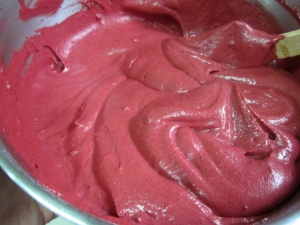 …..beating after each addition until combined … pour mixture into prepared pans

The cake is ready .. cool cake layers in pans for 10 minutes

Seen here, is the chocolate ganache I’m using to coat my single layer cake … you may want to opt for the normal white Creamy Frosting, which makes the cake more attractive ….red & white 😉

If you are coating with Chocolate Ganache, spoon it evenly over cake and let it flows over side of cake … transfer cake to a platter once Ganache sets 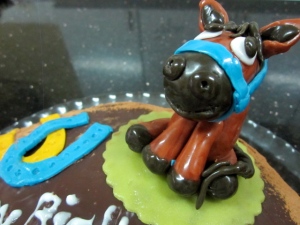 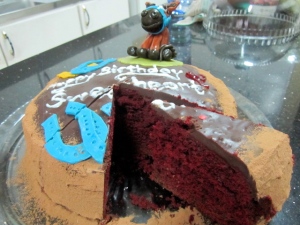 The red colour of the cake is not as vibrant against the brown Chocolate Ganache but the cake is still melt-in-the-mouth soft and the Ganache makes it tastes even richer! 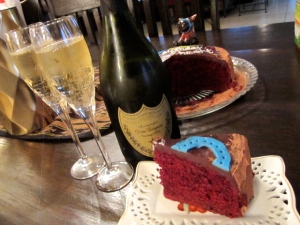 A slice of Red Waldorf (Velvet) Cake coated with a thick layer of Choclate Ganache + a glass of Dom Pérignon champagne …. can’t get any better than this to kick-start a birthday celebration 😉 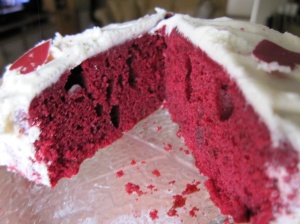 Seen here, is a cake I baked last Valentine’s Day with white Creamy Frosting ….and as you can see, the red colour looks more vibrant against the white frosting 🙂