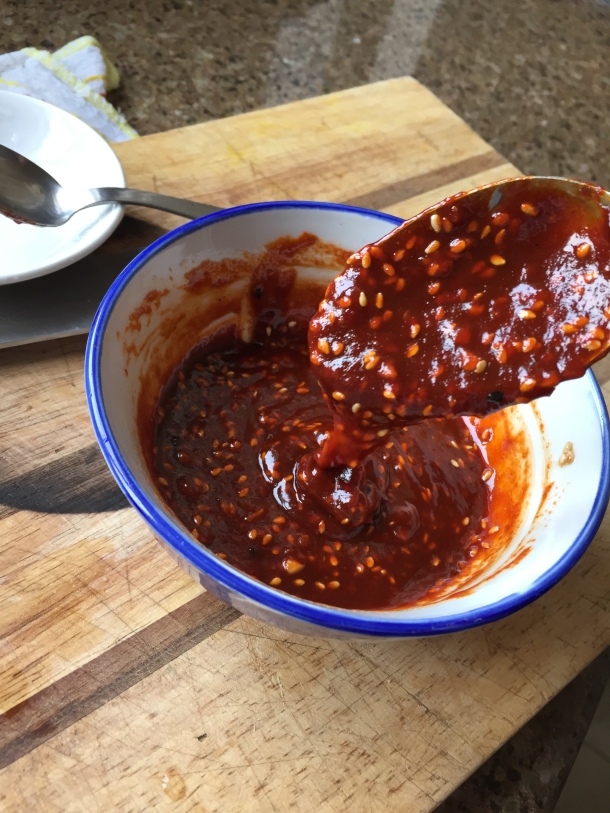 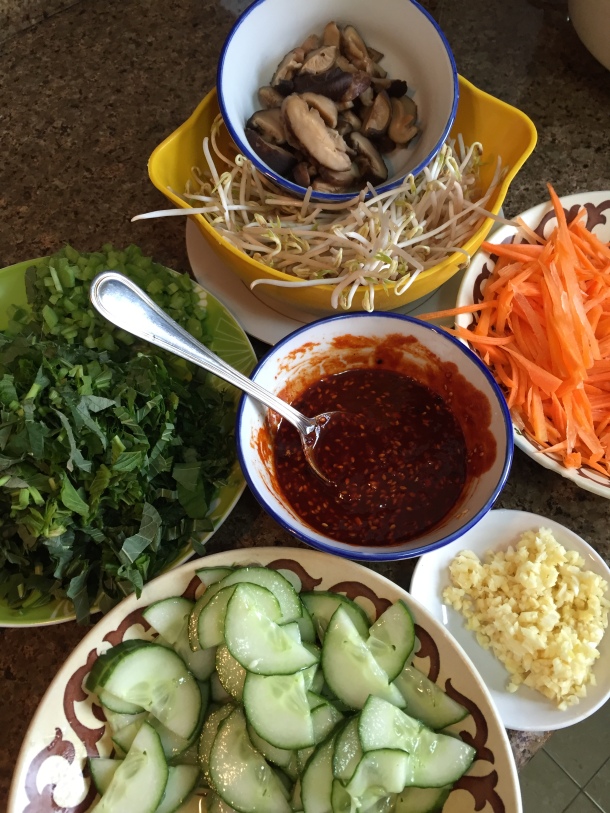 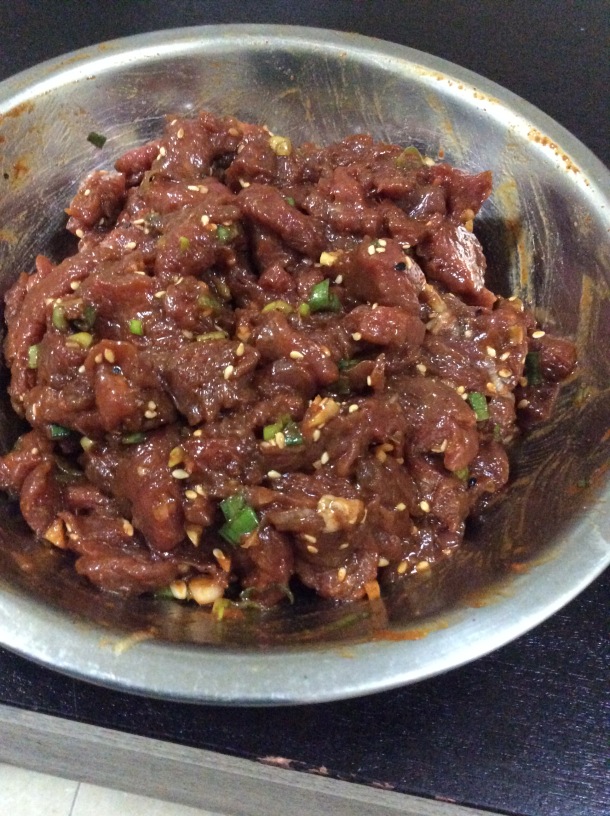 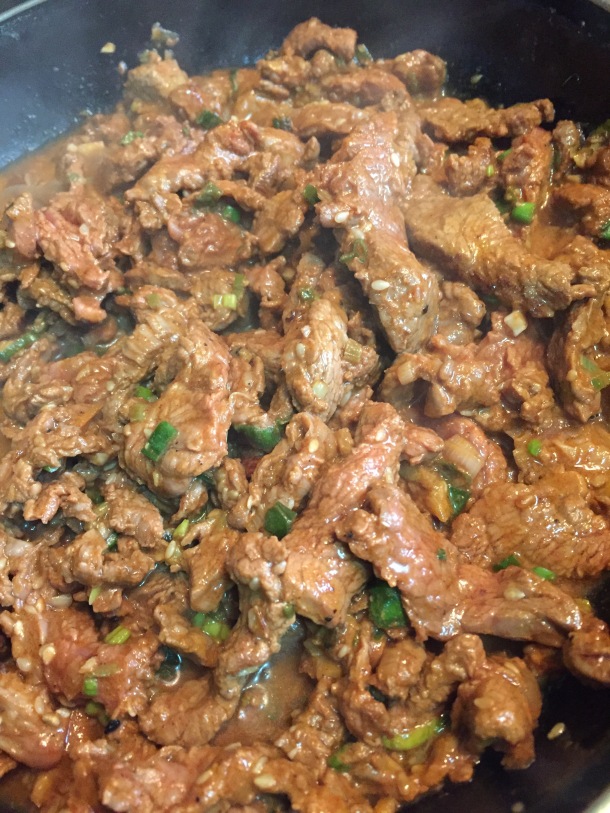 3.  Sauté marinaded beef in a heated pan with 1 tsp sesame oil for 2 – 3 minutes over high heat

4.  I added dried Shitake Mushrooms since fernbrake is unavailable here …which I soaked and then sliced thickly and then sauté it in pan heated with 1 tsp sesame oil + some minced garlic 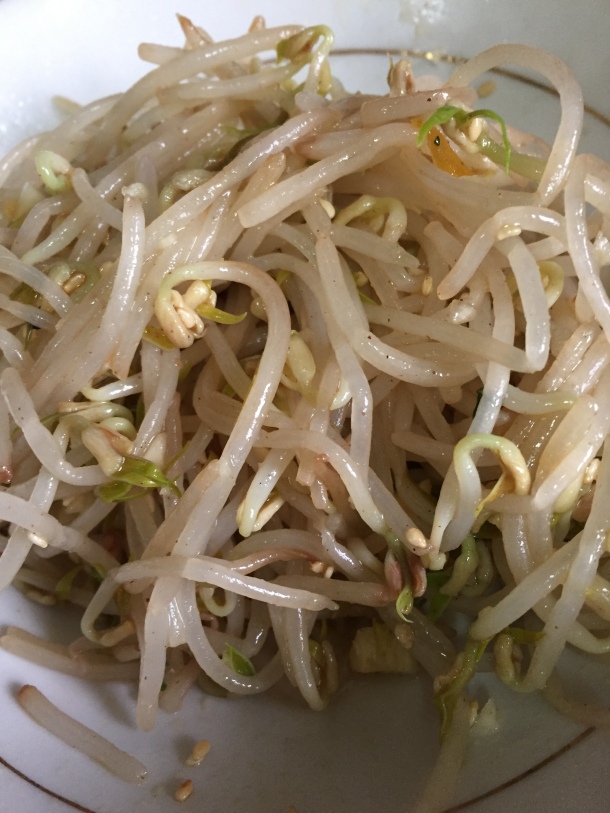 6.  Chinese Spinach (bayam) is best for Korean recipes but if unavailable, you may use the regular Spinach … I chopped it coursely then sauté it in pan heated up with 1 tsp sesame oil + 1 tsp minced garlic then dish out and toss in 1/2 tsp sesame seeds + some pepper & salt to taste 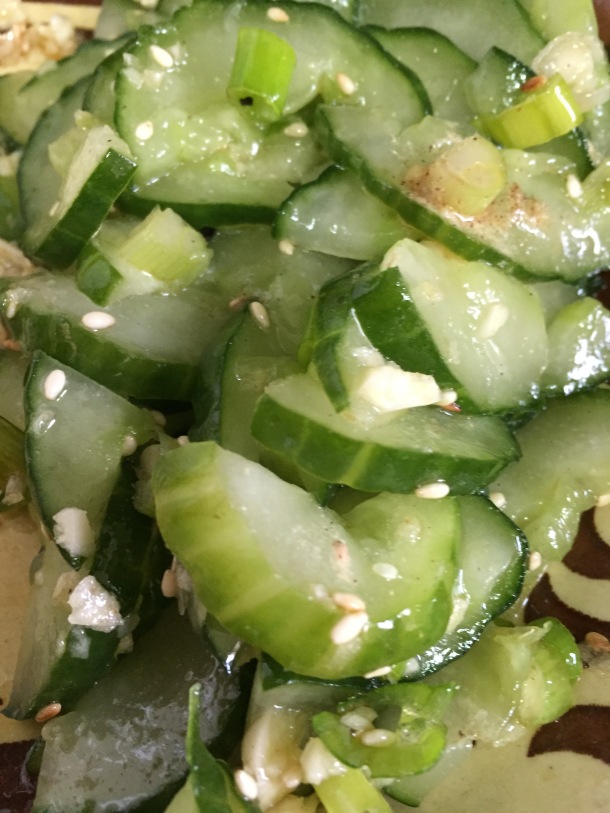 7.  Slice cucumber in half lengthwise and then thickly slice crosswise …sprinkle with some salt and sed aside for 10 minutes …squeeze out excess liquid then toss with mixture of 1 tsp sesame oil + 1/2 tsp minced garlic + 1/2 tsp sesame seeds + 1 Tbsp scallion

9.  Allocate 1 sunny side up egg per serving/bowl

10.  Normally, in a Korean Restaurant, Bibimbap is served in individual bowl – traditionally would be in a stone bowl, heated until very hot then add 1 Tbsp sesame oil and rice and cook rice for several minutes until rice sizzles – but here, you see that I served up in a medium sized ceramic caserole dish which I heated in oven till very hot, laced hot dish with sesame oil then scooped in the rice and allow it to sizzle for a while in the oven and then nicely arrange each of the ingredients in circular direction atop the rice then drizzle a little sesame oil over, top with the sunny side up egg(s) and i drizzled the Bibimbap sauce around and serve up!

11.  Mix the ingredients well in the bowl and Bon Appetite! 🍴🍷